Ornament and the Mind 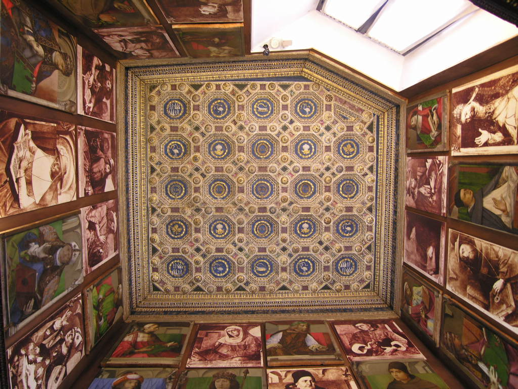 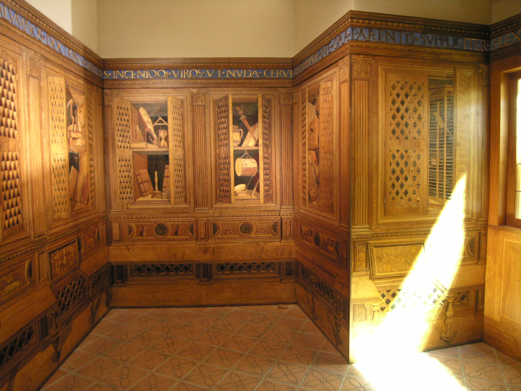 The studioli1 of the ducal palaces at Urbino and Gubbio, Italy, elegantly demonstrate architectural ornament's capacity to conduct the mind between the tangible and intangible realms of human experience. Constructed between 1474 and 1483 for the military captain Federico da Montefeltro, Duke of Urbino, and his son, Guidobaldo, the studioli may be described as treasuries of emblems, for they contain not things but images of things, rendered with remarkable perspectival exactitude. Over the past five centuries, these intimate, image-filled chambers have themselves become emblems for the intellectual pursuits at the Urbino court, crystallizing a unique brand of humanism that integrated mathematics and letters, as well as the liberal and mechanical arts2. 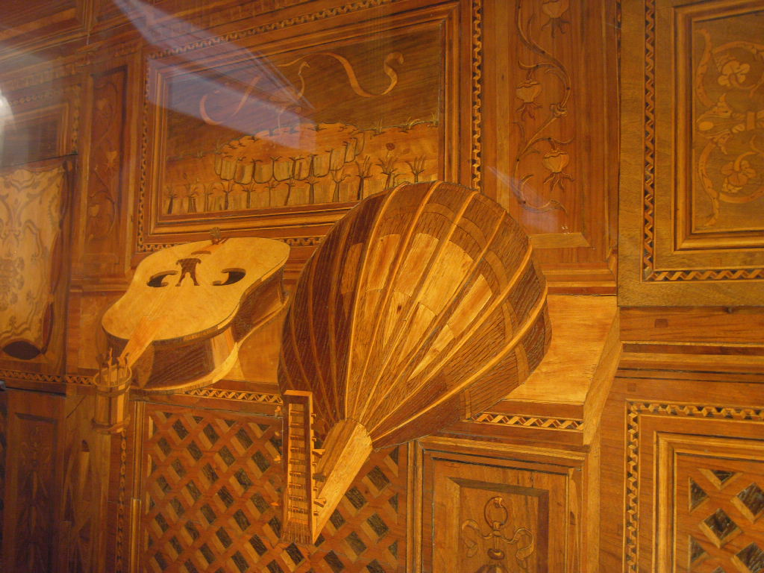 On first impression, the astonishingly realistic depiction of musical and astronomical instruments, books and weapons in the Montefeltro studioli might be seen as the primary intent of patron, designer and craftsmen. Broken lute strings glint with highlights. Cabinet doors appear to open and close as you move about each room. With the abundant display of exquisite artisanal detail, precious devices and lofty proverbs, one might interpret the studioli simply as the propagandistic apparatus of a wealthy and powerful leader. While true in part, other messages are hidden in plain sight, embedded in the wood paneling, oil paintings and ornate ceilings. Careful study reveals that the gravitating concern in the studioli was neither optical realism nor elitist exhibitionism, but intellectual stimulation and worldly engagement. Such rooms were valuable assets in a milieu of ruthless political guile and brutal violence where, as Nicolo Machiavelli noted, a prince should “not deviate from what is good, if possible, but be able to do evil if constrained.”3. Since the past, like the present, can never be fully absorbed in all its simultaneous and dynamic complexity, the original uses and meanings of the studioli will never be entirely transparent and accounted for. Nonetheless, their composition and ornamentation provide clues to appreciating the concerns of our Renaissance predecessors, just as the studioli equipped Federico and his contemporaries to emulate the ideals of their ancestors. Architecture and Memory investigates a particular seam in the studioli that had escaped previous scholarship. While it is impossible to exhaust the studioli of their significances, by better understanding how they were used, as distinct from what they mean from an historian’s hindsight, these remarkable chambers offer insight into the physicality of late quattrocento thought and the roles of multisensorial perception in shaping the constructed environment. What did late fifteenth century Europe think about thinking? How was the mind influenced by architecture and ornament, and vice-versa? 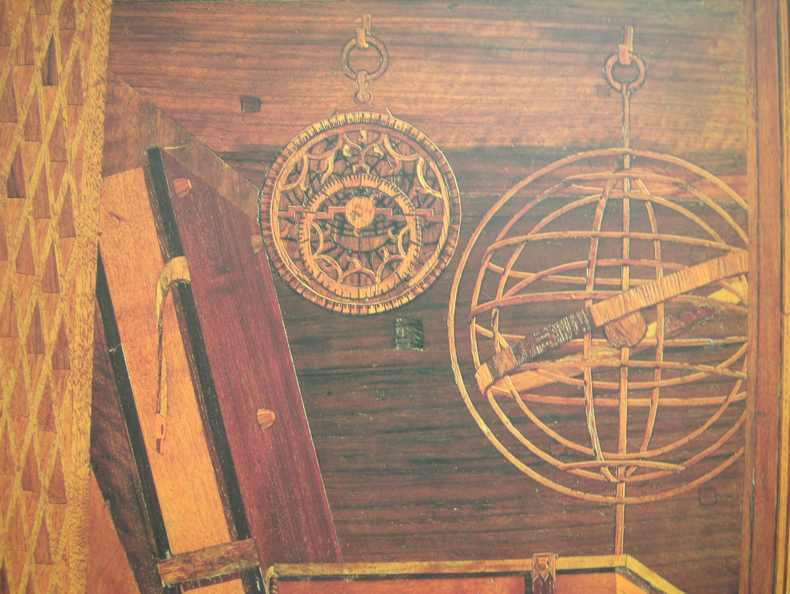 Close examination of the Montefeltro studioli reveals the complex interplay of intellectual, material, and political craft in late quattrocento Italy. The studioli are part of an ancient tradition in which architecture and its ornament offered perches for the birds of thought, informing personal and cultural identity by equipping the mind with figurative structures and placeholders for memory. During the European Renaissance, architecture furnished an expanding range of rhetorical performance, private and public, by practices inlaid in pedagogy and the fabric of everyday experience. Ornate semi-private settings such as the studioli, with their intarsiated trompe l’oeil panels and portraits, blurred boundaries of pictorial and physical space, enabling an observer to imagine alternate states of being.

It was a popular notion at the Urbino court that the mind was not limited to the brain, but included the heart, liver, and viscera, a biomechanical arrangement with architectural consequences. The Urbino studiolo, in particular, played a valvular role in the circulation of Montefeltro governance. While circumambulating a chamber and interpreting its décor, the body’s gestures were believed to circulate spirits throughout the body-mind, enabling an observer to decipher and forge new associations among the things and words displayed. By habitual use, rooms like the studioli and their contents were absorbed into an observer’s mind, providing a portable memory chamber for decision-making in the field of action. Far from their palaces, the Montefeltro dukes could “enter” and gyrate through their memorized studioli as avatars, select among the text and images displayed, echo gestures from the illustrious women and men portrayed overhead, and construe and construct arguments tuned to the issue at hand. In sum, architecture and its ornament were the furniture and food for thought. Owing to their comprehensive iconography – including the seven liberal arts, the muses and virtues, the heraldic imagery of the Montefeltro and Duke Federico's personal accomplishments – the studioli might appear encyclopedic. Yet in the western canon of collecting and the evolution of the museum, the studioli are more closely related to medieval reliquaries, anatomical theaters and cabinets of curiosities. Conceived as associative engines for literary and metaphoric invention, their visual design assisted an occupant to produce new constellations of meaning from a set of curated and carefully arranged figures. The studioli extend an ancient legacy of open-ended architectonic models that exercise the memory and imagination. 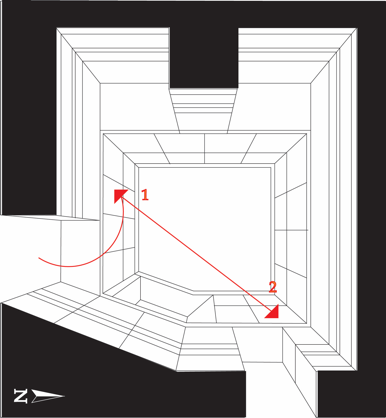 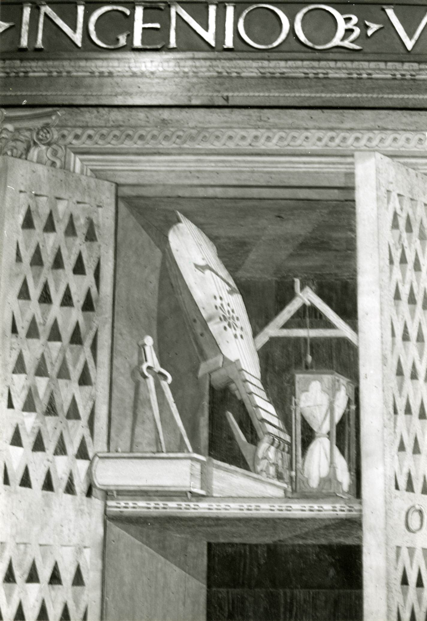 Details in the studioli reveal the interdependence of architecture and memory in the education of a quattrocento prince. In addition to providing a shape-letter memory trigger for subjects beginning with “A,” like Architettura or the writings of Archimedes, the architect’s setsquare at Gubbio offered a popular metaphor for the "right" habits of thought and leadership in humanist learning, and its adjacency to the term ingenioque (talent) and other instruments of measure represented a more complex allegory for the calibration of natural ability with discipline, a lesson akin to the balance of intuition and measured deliberation

In addition to its mnemonic associations, the mirror reflects the ethical lesson of the “mirror of princes,” by which a prince and his people reflect one another, good or evil. The round mirror also biographically evidences the transfer of leadership from Federico, who died during its construction, to his ten-year-old son, Guidobaldo. 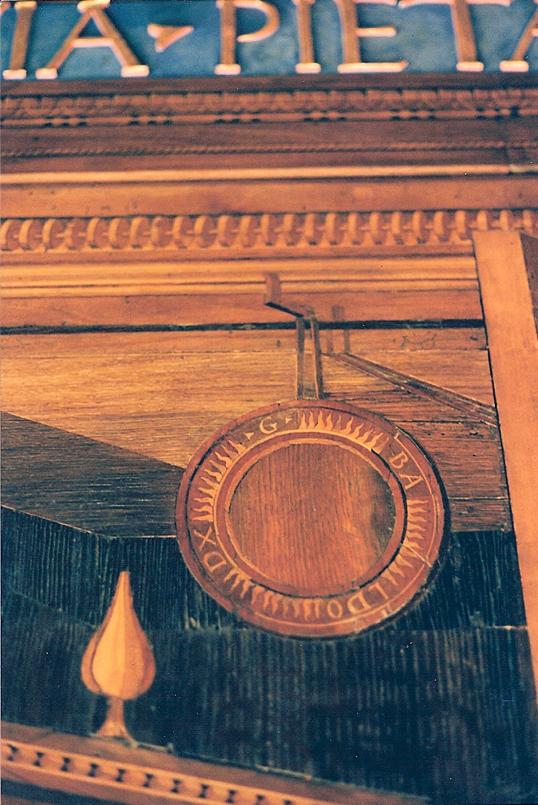 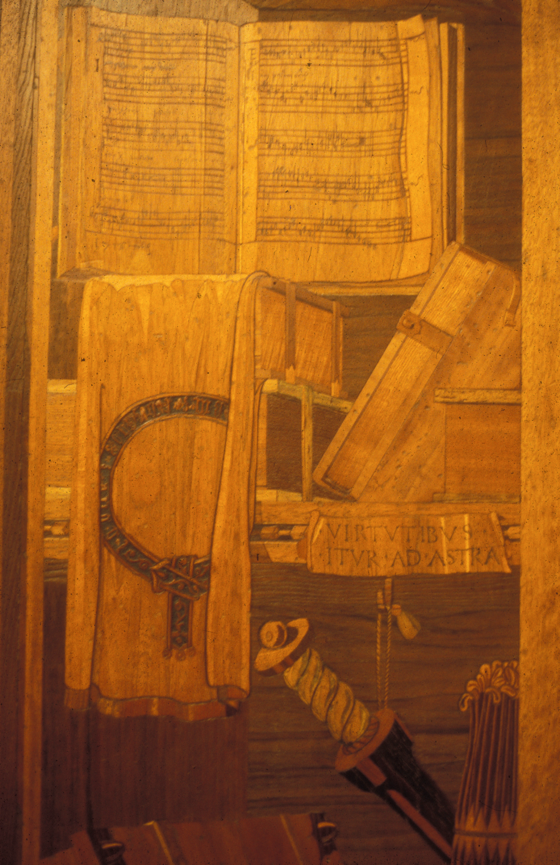 At Urbino, the engrained phrase “virtutibus itur ad astra,”4 exhorts observers to ascend to the stars of heaven and communal memory, by way of virtue.

The ceiling of each studiolo is a heaven in small compass: at Urbino, the emblems of Federico’s worldly accomplishments are embedded among gilded, sparkling coffers. At Gubbio, the color scheme reflects late quattrocento astrobiological theories on well-being. 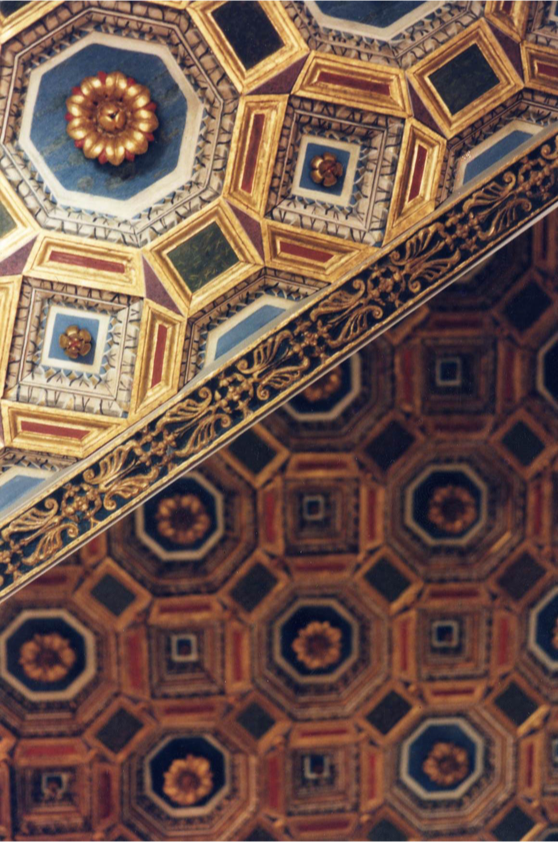 What lessons do the studioli offer us today, as designers?

We needn’t live in the past to learn from the past and breathe new life into its lessons. Similarly, awareness of history does not stifle creativity in the present. On the contrary, research stimulates curiosity and fuels the imagination. Surface appearances and “styles” may be scrutinized to grasp their depths and origins. Renaissance architects, for example, did not consider “style” according to such historical categories as “baroque” or “modernist,” which did not yet exist. For Federico and his contemporaries, ornament voiced the character of a building’s inhabitants while it informed their day-to-day behaviors5.

Across time, designers have reconciled the disparate and often conflicting influences of clients, contractors, external authorities and contextual constraints through the “finishes” of moldings and reveals. How a designer considers these seams and birthmarks manifests one’s personal “vision,” or poetics of design. Close readings of original texts, artifacts, furniture, rooms and buildings, translate fluidly to the design process, enhancing our appreciation of historical and physical context. By detective work that rubs across the grain of history, we rediscover everyday habits and worldviews that may have been forgotten or deliberately overlooked, inspiring more inclusive and imaginative design in the present. Close readings develop empathy for others we may never know directly, past, present or future. Others, too, will interpret our own work in ways we cannot foresee. An artifact cannot be exhausted of its past and potential significances, and is therefore never “finished.”6 In keeping with the character of the Montefeltro studioli, I designed Architecture and Memory to be explored laterally, across the grain. Online readers are encouraged to explore text links, footnotes, extended captions, infrequently asked questions, media galleries and other informational conduits that expand on ancient memory practices that coevolved with architecture and its ornament7. At the time of their construction, the studioli embodied the leading edge in visual representation through the arts of intarsia (wood inlay) and perspective. Translation of this research into the digital environment was a natural extension of its historical subjects, offering an opportunity to explore how current interactive technologies reactivate and transform ancient metaphors for thought and learning. 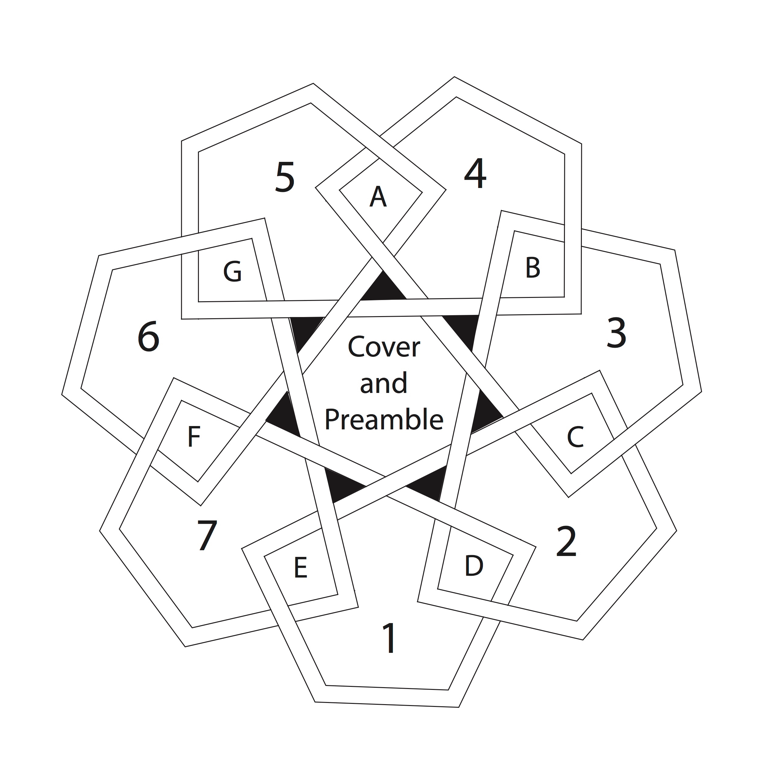 3 The Prince, 103. Federico da Montefeltro’s son, Guidobaldo, was forced into exile twice by Cesare Borgia. Guidobaldo was stricken by the effects of arsenic poisoning and could not participate in the spirited and philosophical evenings at the Urbino court, recounted by Baldassare Castiglione in The Book of the Courtier.

4 This motto is a close annotational reading of Virgil’s Aeneid, the poem displayed in the Gubbio studiolo on the lectern directly below the mirror.

5 I expand on this point in “Rhetoric and Architecture in the Renaissance” (Oxford: 2015).

6 One might argue that a building comes to life only through the uses and abuses by others the designer will never know, personally, yet will influence through the work.

7 “Kirkbride used interactive technology to recreate the process of associative thought common to Renaissance thinkers like the patrons and saints of the studioli but largely abandoned in the move to academic specialization in the late nineteenth and twentieth centuries.” Seaman and Graham: “Sustainability and the Scholarly Enterprise,” p. 275, Journal of Scholarly Publishing. Vol. 43, No. 3. Toronto: University of Toronto Press, April 2012, pp. 257-293.

Robert Kirkbride, Ph.D., is director of studio ‘patafisico, and Associate Dean and Associate Professor of Architecture and Product Design at Parsons School of Constructed Environments, in New York City. He is also Spokesperson for PreservationWorks, a national advocacy organization for the adaptive reuse of Kirkbride Plan Hospitals. Dr. Kirkbride designed the Morbid Anatomy Museum, in Brooklyn, NY, with collaborator Anthony Cohn, and authored the award-winning multimedia online book, Architecture and Memory, which focuses on two Renaissance memory chambers. Kirkbride has been a visiting scholar at the Canadian Centre for Architecture, architect-in-residence at the Bogliasco Foundation in Genoa, Italy, and recently established the Giuseppe Zambonini Archive at Parsons/The New School. Robert received his Ph.D. in the History and Theory of Architecture from McGill University, and a Master of Architecture and Bachelor of Arts in Design of the Environment from the University of Pennsylvania.